"My computer runs so slowly..." 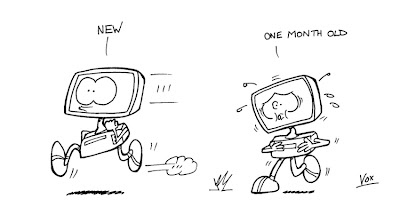 Computers are like marriages. First comes the initial spark of true love, where your computer can do NOTHING wrong - it's fast, exciting, and makes you go weak at the knees. Then comes the wedding, where you shower it with gifts like new hard drives, better expansion options, a dedicated place to sit (a new IKEA desk, rather than that tatty old thing you used to use...)

But later comes the 7 month itch. Your computer has become slow, lethargic, and lazy. You yearn for the days when it used to want to dress up for you, wear provocative desktops, whisper sweet nulls in your ear, but now all you get is moaning...

"I'm running out of memory!"
"Stop pushing my buttons, I can only do one thing at a time!"
"Your email is in the recycle bin!"

As any good marriage counselor will tell you, it's about give and take - that is, it's about what resources you have and what resources are actually required. For a computer to run programs quickly, it needs the following...
Free memory is the single, most important thing you require, which is why it's usually the first thing that's upgraded. Computers need memory space to do anything - think of memory as paper sheets that you write on. Every time that you need to make a note, you get a fresh piece of paper, and you keep using fresh sheets because it's easier. That's great, but what happens when you run out of sheets - you've got nothing more to write on. "Oh dear, I can't write that note to dear Aunt Jessie..."

Computers have a way of getting around this, called paging. What that means is that instead of using physical memory chips for memory, it copies some of it's memory onto your hard disk, which is analogous to our paper sheets being placed into a filing cabinet, and more paper sheets (that we've erased with a pencil) being brought out from another filing cabinet. The problem with this process is that it's sloooooooooowwww, so instead of our filing cabinet being in the same room, it's actually in another room - in another house - in the sea - of tranquility - on the moon. Aunt Jessie's really going to get that note now...

In short then, paging too much is not a good thing. Not only is it slow, but the computer is wasting it's time - which is where processor cycles come in. A processor cycle is simply a unit of time that computer can use to do something constructive. New, modern computers have CPU's (Central Processor Units) that can perform an incredible number of operations (or cycles) every second, but those precious cycles are easily lost through wastage, so instead of doing something useful, they could be being used to display a screen saver, or play a tune, or download crap from sharing sites. It's important then that if you want your computer to run efficiently, you should always make sure that you are only running what you have to - the infamous rule of thumb #1.

We've mentioned fragmented disk space - this is relatively low on on the list, but it still applies in some cases. Remember our paper filing cabinet analogy? Well, when you were filing your paper sheets, you didn't care where you put them. They are all over the place, and whenever you want to find that note to Aunt Jessie, you have to search through several filing cabinets to find the sheets you need - that's fragmentation, and it happens to your hard disk. The older / more abused your computer gets, the more fragmented (and slower) your hard disk becomes. At this point, defragging your hard disk (essentially resorting the disk space) becomes a viable option, but DON'T SWITCH OFF WHILST YOU'RE DOING IT!!!!

Fast access to hardware basically means making sure your computer can talk to it's peripherals (like hard disks or DVD / optical drives) quickly, and is the last thing that *could* slow a computer down. It could be that you have the wrong driver for the peripheral, or that something else is hammering it whilst you're trying to use it.

With all this is mind, let's look at a couple of vict.. er, case studies. Mr. X came to me, complaining that his XP machine was slow - on examination, it turned out that his task tray (that's the little area on the bottom right of the windows desktop) had so many icons that it covered the entire taskbar! It seems Mr. X loved his gadgets, and had been trawling around the freeware sites looking for interesting ones, and then installing them - the trouble is that each one of these icons is a program that requires memory and processor cycles, so un-installing these programs made the machine responsive again.

Mrs. Y had a new laptop (less than 3 months old) that was so slow, it took 25 minutes to load! In this case, windows explorer had somehow been nobbled (possibly by a trojan, or a rogue game) to the point where the hard disk light was constantly on - a sure sign of excessive hard disk activity. In this case, the only thing to do was to recover the machine to a factory fresh state by using the recovery disks.