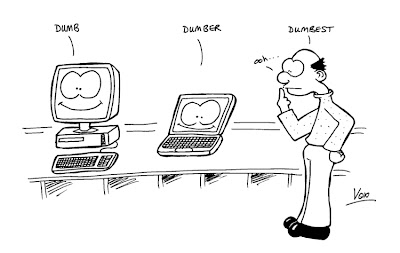 Let's be honest with ourselves.

If you're over 40, you're a technophobe. You may not realize it yet, but admission of this simple fact is going to save you pain and suffering in the long run. TV remotes confuse us, to the point where when the battery runs low, we try and press the buttons harder, just to force that last erg of energy in the device into use by shear force of will. Microwaves mystify us, phones perplex us, and children's toys fascinate us - we're hopeless, and we've just gone and bought ourselves a piece of technology that we're not even sure we want (we only bought it because Dave in accounts has one, and he said it was the best thing since sliced bread...).

Firstly, let's identify the type of computer you have...

If your computer doesn't match any of the above, your either a very rich person (I hate you already) or you have a computer that was probably designed by DaVinci himself - either way, you're reading the wrong blog...

This is all what we term hardware - the physical bits of the machine. You also need software - a set of instructions for the computer that turn it from a piece of electronic junk, into something we can use (if temporarily). You have two types of software...

As I come from a PC background, let's look at what's available for the PC in terms of O/S. Most people with a PC run a flavour of Microsoft Windows, and you are probably one of them. Currently, the flavour of the month is Windows 7, but your PC could also have one of it's predecessors, namely Windows Vista or Windows XP. All of these do the same job, but with differing levels of gimmickry. Desktops/laptops can run any of these, but net books/notebooks should be running Windows 7 or XP (they use less resources than Vista, and don't crash half as much). If you're not running Windows, you may be running a Linux or Apple based O/S - congratulations, as you may not have as many problems in the long run as your windows brethren.

As you see from the above, it's vitally important to get it right, but it's not rocket science. Here's the general rule of thumb when it comes to running applications...
if you want your ownership of your computer to be as pain free as possible, remember the 1st rule...

"DON'T RUN MORE THAN YOU HAVE TOO"