Impatience - the greatest computer killer of all... 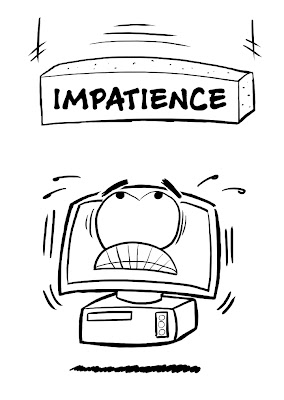 It's been a long day. You're tired, your boss has been on your back about that job that came in late, and the traffic was bad on the way home. To top it all, you've just had a barney with your partner about TV / dinner / the in-laws / the kids / their dopey brother who's just come to stay and eaten all the cheese. To relax (who are you trying to kid here...Ed) you turn on your computer to do a bit of surfing...

Welcome to the greatest computer killer of them all - Impatience.

Computers are supposed to be lightning fast - after all, everything in them runs at the speed of electricity - but unfortunately, we will insist on actually using them. We install countless little gadgets, gizmos, and thingummies that all take time to start up when your computer boots, and to make matters worse, we then try and do something positive, like web browsing. The poor computer tries to do what you want, but it's now approaching the point where too many things are asking for resources.

So it stalls you. It starts queueing the requests (if you're British, you should be used to queueing for God's sake), dealing with them as best it can. Systems requests, like updates to the Operating System or Anti Virus usually get first choice, at which point, your computer slows down to a crawl - it is of course, at this point, that we take the loaded gun of impatience, and shoot ourselves in the foot with it by hitting the "reset" button - effectively telling the computer to stop ANYTHING it's doing (including writing to your hard drive), and start again. It's no surprise then, to see your computer getting it's knickers in a twist as it tries to go through it all over again.

A word of advice from the experts. Computers very seldom "lock up and die" - they can go off for long sulks though (think of your partner after a blazing row and you might come close). To see if you're computer is really frozen, check the following...

If you can say "yes" to any of these, there's a 95% chance that your computer is NOT "locked up". If in doubt, wait 20 minutes - the chances are that any important tasks should have finished by then, and you'll be OK to reboot.

Now then, I fancy a cheese and pickle sandwich. Hang on a minute, where's that block of farmhouse cheddar gone...