The new WACOM Cintiq range – a review for the CCGB 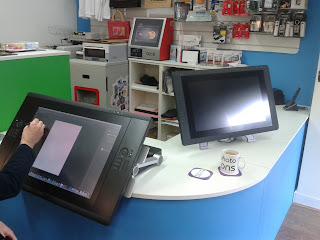 If you’re a cartoonist with a computer, then you’ve probably heard of WACOM, the Japanese based manufacturer of arguably, the most successful range of graphics tablets in use today – in fact, many of you reading this are using a WACOM tablet, or something similar in your day to day work.  Recently, WACOM announced improvements to its “Cintiq” range of screen/tablet displays, and as a user of a WACOM based Tablet PC, I wondered “Just how good are they?”…
Trying to find someone with a Cintiq to try, is like looking for a Brazilian waxer at a Furry convention, so after making a few calls to WACOM, Digital Photo Solutions in Beckenham came to the rescue, and the club arranged to demo the range at DPS for our interested members.  On hand were Dave Harrison of DPS and David Oduro of WACOM, who fully expected us to arrive en mass, unfortunately, we had a lot of late cancellations, and so just Pete Ellis and my good self were there to represent the CCGB (my stomach counts as a single entity, so that’s three – officially…)

So, let’s cut to the chase –just how good are they? 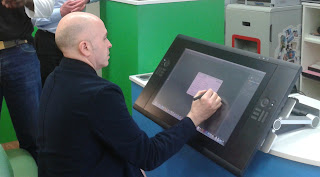 The 24HD (with touch) is the flagship of the Cintiq range.  For those of you that have never seen a Cintiq, you’ll see from the pictures that it looks like a large drawing board – which is basically what it is – but it’s also a computer screen.  This means that by using the pen supplied, you can draw on the screen as if you were drawing on paper (with the right software).  Because the Cintiqs are input devices, they can be used with any computer that supports them (this includes Macs & PCs) - DPS’s Mac had Photoshop installed, which we used to try out the various features.

First impressions are always important, and you can tell by first glance that this is a quality product.  It feels solid and well made, but is still quite light for its size.  The 24HD comes with its own stand, which allows the screen to be positioned to suit the artist, as well as containing the various port connectors for the required cables (very neat).  Speaking of ports, for the larger Cintiqs, you’ll need a DVI monitor port, as well as a USB port – the only other thing this beast needs is power.  The screen resolution is 1,920 x 1,200 (HD), which is good enough for any art application, as well as designed to reduce eye strain over long periods.  Also, whilst we were using it, I couldn’t detect much heat build-up – make no mistake, they want you to use this as your weapon of choice…

The 24HD comes with 10 configurable express keys, and two configurable touch rings.  The touch rings on our demo were set to rotate the page in Photoshop - a lovely little idea, which would also work well in Manga Studio, but as with almost everything with the Cintiqs, you can set them up (as well as the express keys) to do what you want in the Wacom Driver control panel.

As I’ve used something similar before, I suggested that Pete have the first real play with the device.  Pete uses an Intuos 2 tablet professionally, so I wanted to see long it would take for him to become comfortable with the Cintiq – the answer was, extremely quickly.  If the version of Photoshop had been the same as Pete was used to, it would have been quicker still.  From my own experience, I can report that the 24HD performs well – pen point mapping was good, and there is very little pointer offset (the distance between the point of the pen and the pointer on the screen under the glass).

The “Touch” option is an interesting feature.  In short, WACOM has given the 24HD both a pen enabled screen, and a virtual capacitive touch screen - which one you use depends on where the pen is.  If the pen is near the screen, the standard pen-enabled features work, if the pen falls outside the screen’s range, the capacitive screen takes over.  This means you can do things like rotate the screen with your fingers, pinch to zoom etc…  It’s a nice idea, which nearly works – I found that it misfired a few times when I was drawing – but you can turn it off if it becomes annoying.

Everything else was as you’d expect from WACOM.  Good pressure sensitivity, responds well, and is easy to work at for long periods.  In summary, the Cintiq 24HD is a quality product, designed for (and intended for) studio use.  The Cintiq 22 is essentially the same device, minus the touch facility and the touch rings, so I won’t bother to elaborate much – it is however, much neater, and may suit your needs better than the larger 24 HD, so compare before you buy. 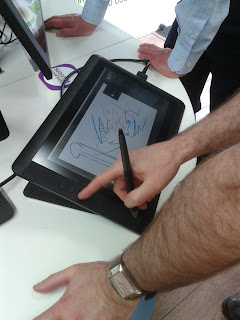 Although the baby of the range, the 13HD is the entry level Cintiq, and replaces the 12W – comparison of the two devices is therefore inevitableJ.  The 13HD has a 1920 x 1080 pixel screen, which really is razor sharp, as well as having a wide screen aspect ratio.  WACOM have slightly changed the pen for this display (it’s slightly thinner), but it still uses the same technology, so the pens are interchangeable across the Cintiq range (as an aside, the modern cintiqs can use pens from the Intuos 4 range of tablets, or above).

There is no “touch” option available, but there are the usual programmable controls that are almost as good as its big 24” brother.  The biggest improvement to the baby Cintiq is in the area of cabling.  The original 12W had a large converter box to which you plugged in your cables – now, the cables are direct into the device – power, USB and HDMI.  Yup, that’s HDMI, not VGA or DVI – you’ll need an adapter to use those (between £10-£20).  To be fair, it’s better for it, as the 13HD feels slimmer and lighter – it also comes with a pretty good stand.

Overall then, the 13HD is a worthy replacement for the 12W, but is it worth replacing your 12W with a 13HD?  To be honest, I think not, unless you REALLY need to get rid of that converter box.

Summary:
Wacom have really put a lot of work into the new Cintiq designs.  It shows – and I WANT one…

Technical aside:
Some people have asked my how the Cintiq range compares to the DTH or PL product lines that they do, especially as they look similar, and have comparable features, so I asked David Oduro of WACOM about it.  The answer is that the DTH & PL lines are interactive displays, and are designed to be used for short periods, not day in / day out for weeks on end.  If used that way, they can cause headaches etc., whereas the Cintiq range is designed for continual safe usage for as long as the artist requires.

Thanks:
Firstly, thanks to fellow CCGB member Pete Ellis for his contribution.   Secondly a big thank you to David Oduro of WACOM for the technical knowhow (he really knows his stuff) and Dave Harrison of DPS for the venue and demo equipment.  DPS are one of WACOM’s main distributors in the south, so if you want a good deal, please call him on 020 8460 3690, or by email at dharrison@dpsb.co.uk – and don’t forget to mention the CCGB – you might get a discount!

Great article and very informative - thanks! Wish I could have gone.