Graphics Tablets - Mightier than the Mouse? 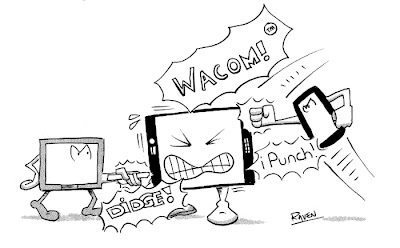 "MIGHTY MOUSE IS ON HIS WAAAAAAAAY!  HERE I COME TO AAARRRGGGHH!!!"

Back in days of yore, ye olde scribes of merriment and hilarity would scritch away on their parchments with trusty metal pen nibs, bringing to life their array of humorous characters for the delectation of the common man.  Ink would blot, spit and spill, and verily, they said unto themselves "Bugger this for a lark - I'm going down the pub..."

But enough about the golden age of Fleet Street.  Today's cartoonists are more modern, dynamic, and techno-savvy (yeah, right).  They have embraced the Digital Age, and that's primarily because of one invention - the graphics tablet.  Never before, in the field of humorous endeavour, have so many grumpy old gits work flow been transformed by one device.

So what is a graphics tablet, what does it do, and how can it help the average cartoonist/artist?

Let's start with the basics.  We've all used a mouse with our computers - that's the little box like device with buttons that we move around with our hand to move the pointer on the computer screen.  Move the mouse left, the pointer moves left, move it right, the pointer moves right - in short, the movement of the mouse in your hand is translated into movement of the pointer on the screen.  Add buttons you can press to perform actions, and you have a computer input device (that's a fancy name for anything that allows you to control a computer)...

Mice were fine for a fair number of years - then some bright spark said "what if we could do the same thing as a mouse, but use a...PEN! You could..WRITE...maybe...DRAW!  MY GOD - it would be BEAUTIFUL..."

Enter the graphics tablet. The tablet is a deceptively simple device - resembling a pad (with a wire connected to the computer) and a pen, the basic graphics tablet works by treating the active area on the pad as the "screen", using a "digitizer" (another fancy term - just means a device that translates one set of co-ordinates (the pad) to another (the screen) ).  Moving the pen on the active area moves the pointer, and pressing with the pen performs the action.  This sort of device was first seen in the 1950's but it wouldn't become popular until the late 1970's, with the arrival of the home computer.  Once the Apple & Microsoft markets had established themselves, one producer of graphics tablets soon became the biggest name in the field, and the one we tend to associate with the technology - WACOM.  Wacom's tablets, such as the Graphire, Intuos and Bamboo models, typify what we expect a graphics tablet to be - a pressure sensitive pen/stylus, combined with a screen ratio "pad" - with this technology, the cartoonist was finally in control...

Well, sort of.  For anyone used to drawing on paper, using a graphics tablet is a bit of a learning curve, because although the pad represents the screen, it does not occupy the same physical space (it's sitting on your desk, after all) - this can lead to a sense of "detachment" when using the pen to draw.  The tablet manufacturers realised that what people wanted was a way they could use the pen by drawing on the screen.  "What if" said an engineer "we put a digitizer behind a LCD screen..."

Enter the Tablet/Screen hybrid, typified by the Wacom Cintiq range.  The tablet\screen hybrid (as it's name suggests) comprises of a LCD screen of some kind, and a pen/stylus, and works by having the "digitizer" of a graphics tablet behind a LCD screen - when the pen is moved on the screen, the pointer follows.  Most hybrids take the form of an extra display unit, that can be used along side your existing monitor, but as we'll see later, there are exceptions.  The tablet/screen hybrid experience is as close as an cartoonist/artist can get to "drawing on paper", and is therefore, the easiest to learn, but the ease comes at a cost, as these devices aren't cheap - most hybrids cost over £700...

Our engineer is a busy old bee, and comes up with another bright idea -" put the digitizer and pen in a laptop..." - and the Tablet PC was born.  These devices are as portable as laptop (sometimes more so), and have all the advantages of a hybrid, but are truly portable, as well as being fully functional PCs.  Unfortunately, only a few manufacturers ever made them, and their initial cost was too steep, but second hand, these devices are exceptionally good value for the cartoonist.

The first generation of Tablet PCs in the Naughties did lead the way for another type of device - the ultra-portable "Pad" device, the best example of which is the Apple iPad.  Unlike a Tablet PC, the Pad has a touch-sensitive screen which the user works with their fingers - they point, the pointer moves, they tap, they generate an action.  Most touch screens use "capacitive" technology (that is, the screen is conductive to electricity).  The screen in normal use, produces an electrical field, which is distorted when a conductive material (such as the skin on your finger, or a stylus) is brought into contact with it.  These devices are usually not sensitive to pressure, or able to work in extreme detail, but these limitations will only be temporary, as the technology continues to develop at a staggering pace.

So what does the future hold?  As touchscreen / Pad technology comes down in price, it will also become more capable.  In the not-to-distant future, the hybrid will become replaced by all-in-one Pad device (probably Android based) that will respond to pressure from both hand and stylus.  You'll be able to take the device anywhere, and work on the move, and the device will be cheap enough to be a no-brainer for the modern artist.  Already, the Samsung Galaxy Note 10.1 is with us, which comes really close.  Wacom had better watch out, because if they don't keep up, they'll be overtaken...