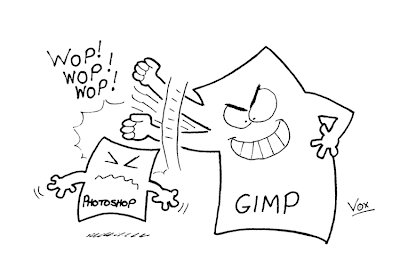 I'm a computer nerd, and I'm over 40, with numerous offspring. That means I have one thing missing from my life....CASH! How many of you have come home from a hard days graft, only to have said offspring corner you in a manor not unlike that of the S.A.S on an embassy mission, brandishing requests for moolah faster than a Heckler & Koch MP5 machine pistol? Go on, raise your hands (those that are able too)...

We're over 40, and we're skint. So WHY OH WHY do we have to keep hearing this question?

Open Source is more of a movement, than a phrase. It's a philosophy for software creation. In short, it means that anyone can modify an existing Open Source program, provided the modifications (and the source code that has been changed) is made freely available, for nothing. Open Source is powerful, because it puts the power of software back into the hands of the users. You need something done - someone somewhere has probably already created that will do it for you, for nothing. Open Source has even given birth to Operating Systems, such as Linux! Open Source has lot's of success stories, and I'm going to introduce you to two of them.

The second success story is GIMP. GIMP stands for Gnu Image Manipulation Program, and is the nearest thing available to Photoshop that is free. It can manipulate photos, create stunning artwork, and 9 times out of 10, it can do everything photoshop can, for everyone up to the level of professional artists. I use it all of the time, in fact, the cartoons featured in this blog were adjusted by GIMP.

Do you (and your pocket) a favour. Before you get suckered into the big boys, look into Open Source alternatives - you won't be disappointed, and you'll save a ton. Right, time to open my copy of GIMP and create my next masterpiece - mega stardom, here I come...